I know I’ve not always been pleasant to you, and I’m sorry about that, but lets face it, your old and new books, as well as the weird old men that have never had a family, yet who are supposed to be listened to as some sort of relevant authority on the matter, tell you (and in many cases DEMANDS of you) that it’s ok to do unspeakably horrible things to people like me and people I love and care for. It’s hard not to take that personally if I’m honest.

That Jesus guy had some brilliant ideas – treat people how you want to be treated yourself and forgive them when they don’t. No right thinking person can argue that’s not a good outlook to have in life, but unfortunately so few of you seem to understand that.

But if any of you actually agree with the sort of message being sent out in the ad in the image below, then give me a heads up and I can just remove you from my life because if you think for even one second that this sort of hate speech being made in your name is ok, I sincerely don’t want to know you.

You have institutes and “churches” who’s outlook on life is 100% incompatible with a modern, smart, “live and let live” society. Most of us sensible people stopped being afraid of women and alt sexuality or alt gendered people a long time ago – what possible threat do they pose to us? If you stopped clinging onto this perversion of thought that something written in a book over a thousand years ago and that has been corrupted and wilfully misinterpreted to further the ends of deplorable and despicable humans, you would realise that you’re not under attack, it’s only your bigotry that is. You can be a Christian and not be a bigot. In fact, one might suggest that the whole point about being a Christian is to NOT be a bigot and not mistreat others. If they are sinners, then it’s up to your god to deal with them – and he said he would – so you don’t need to worry about it.

It’s a new year and here in Ireland we face a referendum for Marriage EQUALITY in a few months – not marriage breakdown or change or anything of the sort. Equality. The people who put out the ad below seem to be deeply afraid of this. If two consenting adults want to get married and reap the personal, emotional, spiritual and legal benefits of that union, who are you to stop them? If a non-heterosexual couple pays the same taxes, water charges, property taxes, universal social charges, raises their children with your’s, sends them to the same schools as your’s, etc, etc, etc, then what possible justification does any state or organisation have to deny them one of the few positives, as your equals, when they already share in all of the negatives (and then some – you’re not risking getting legally kicked out of your job if you happen to work for an organisation that for some bizarre reason is allowed to ignore employment equality law because bishops).There is literally nothing that a same sex couple getting married can do to you or your own marriage except maybe to show you how to have a fabulous wedding reception.

Mná na hÉireann, remember when you had to quit your job when you got married? Remember how you were legally your husband’s property and he could more or less beat and rape you without fear of reprimand because the law supported his “right” of ownership? Remember how we changed that and literally everyone with half a brain looks back at those legalities as barbaric? That was only 40 years ago, in another 30, those of you who object to marriage equality now will be seen as the barbarians. That’s already happening. Just imagine if you were born in an Islamic country, you’d still have to fight those fights and your outlook wouldn’t look good. Please remember, 90% of you are only Christian by virtue of geography and not divine intervention.

There was marriage LONG before we had Christianity and there will probably be marriage long after we finally transcend the need to create stories about the universe’s foundings (and hey, even the Pope has come out and said The Big Bang makes the most sense because SCIENCE). The time has already come when we don’t need to frighten people with the idea of a lifetime of punishment if you don’t adhere to what was once thought of as a pretty solid moral code – we’re all wayyy to smart to fall for that as a control mechanism anymore (note, I’m not denying the possibility of heaven and hell, but you have to admit, it’s the sort of thing that would frighten the shite outta those who weren’t smart enough to see past it and we’ve still got a pretty decent education system in Ireland despite ourselves). If the institutions and weird old men weren’t so afraid of losing their grip of power (and they already are), they’d have been properly teaching you all how to talk directly to your god a long time ago and would have removed themselves as the inefficient middle management types that they are. I’ve spoken to him, he seems like the godly equivalent of a nice but busy CEO and I’m pretty sure he’d listen if you needed to get a hold of him, but remember, as a rule, he generally helps those that help themselves. 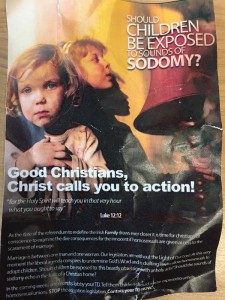 So look at this picture. If the content of this ad represents how you really think, then I’ll light a candle for you and hope that you stop hating in either this life (ideally) or your next lives. The reaction today has been to get the word sodomy trending on Twitter to show the world just how pathetic we think this sort of hate speech is and how hilarious it is that actual adult humans with houses and cars and bank accounts and the ability to breed would put out a message like this as though something bad is about to happen to their children because we want to treat all people as people.

Lets not mention the hundreds? thousands? of children that were actually and definitely abused and killed and dumped in septic tanks or homes or delivered into lifetimes of physical and mental anguish at the hands of the most prevalent of Christian sects in Ireland.

PS: Lets finish with some music from the delightful Garfunkel and Oates (and a shout out to Ciarán for reminding me of the name of thise tune).